That’s all folks! The Public House buildings and business have been sold. We will remain open for dine-in & take-out service Tuesday to Saturday, from noon to 8 p.m. until Saturday, February 27. We will be featuring some of our favourite dishes at a discount until we close. We would love to see you all before we close permanently at the end of the month.

Sadly, after 10 years, The Public House will be no more. It has been an interesting and sometimes tumultuous ride with many new friends & customers, lots of happy moments & some controversy! We turned this tiny matchbox of a building into a key player on the hospitality scene in downtown Kingston. We appreciate the wonderful support we have received from our many constituents and valued regulars. Without your support this venture would not have been possible! Thank you! We wish the new owners nothing but success!

Take Out at The Public House

The Public House will be offering take-out  Tuesday to Saturday until February 27.  See our menu below.  Call ahead (613-766-9296) or order.   For take-out orders we can offer pay-on-site service with curb-side pick up with payment (credit or debit) in your car.  Normally turn around time is 15 minutes minutes for take-out; however you are welcome to call ahead (613-766-9296) and specify a pick-up time. See our current take-out menu as of February 13, 2021: take-out-menu

About The Public House, Kingston

The Public House (formerly Sir John’s Public House) occupies the building used by Sir John A. Macdonald as his law office from 1849 to 1860.  While touches of the past remain, the pub has a contemporary atmosphere. The restaurant features a great selection of imported and local beers and wines.   The menu is reasonably-priced and features many pub classics.

We are proud of Kingston’s past and our relationship with Canada’s first Prime Minister.  Macdonald began his political and law career here in Kingston. He is credited as being the individual most responsible for Canada’s Confederation in 1867.  Inside the pub you will find objects relating to Macdonald and a plaque on the outside of the pub commemorates his association with the building. 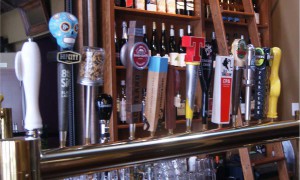 7 thoughts on “The Public House”